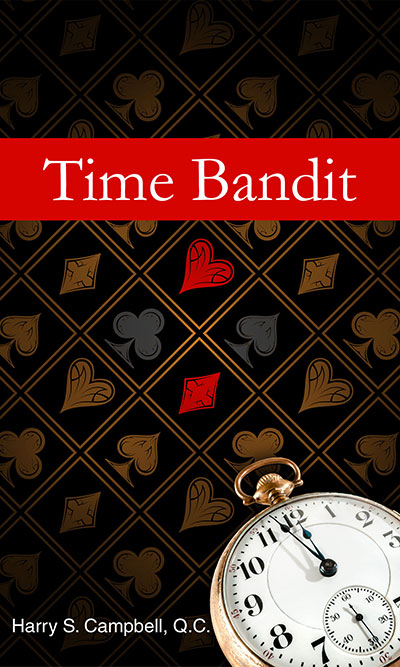 Time Bandit
by Harry S. Campbell, Q.C.
It all starts with a gamble—and a very sick gambler. Ronald Mabie, the chief accountant at a thriving law firm, couldn’t see a way out of his gambling debts. His nights at the Club, an illicit underground poker establishment, had caught up with him. He knew how to work the numbers to defraud his law firm of just enough cash to cover his ass. He thought he had gotten away with it when Thomas Stafford, a hungry young lawyer, discovered what he’d done and forced him into his service. With Mabie’s help, Stafford began stealing time and billings credits—from his partners and associates. Stafford’s earnings and stature in the firm and the community rose. He had it all, but wanted more. He had become a Time Bandit.
The game Stafford plays is dangerous—even more dangerous than Mabie’s. To maintain his position in the firm, he has to take bigger risks. Collateral damage accumulates, most notably to a young associate named Stephen Wallace, who is left out in the cold, stripped of his job and reputation by Stafford’s greed. Wallace will do everything in his power to bring Stafford down—to catch the Time Bandit—while Mabie struggles to keep one step ahead of his debts and his bookmakers.
$19.95