Beyond Batty Catters by A.J. Gillard 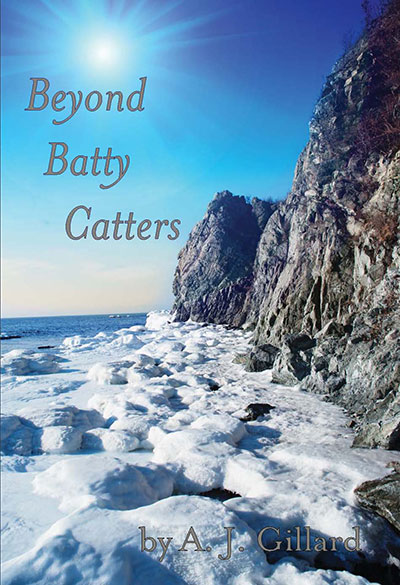 Beyond Batty Catters
by A.J. Gillard
What would you do if you could go back to your hometown a completely different person? Hidden by a new face, new identity and unimaginable wealth?
On the ancient Indian burial ground in Englee on Newfoundland’s Northern Peninsula a tragedy had occurred that changed the life of Kennedy Warren.
At seventeen years old, Kennedy and Lance had been madly in love, pregnant and daydreaming of living beyond the Batty Catters – the stunning frozen sprays at the outermost point of town. Then, in an instant, Kennedy’s world collapsed when she witnessed Lance’s older brother, Reg, murder a man in cold blood. Penniless and scared, she was forced to run from the town and from the man she loved.
Years later, with a new name, and as the CEO of a billion dollar corporation, she returns to visit her parents’ graves, find closure with her past and move on. Kennedy, now Kay Toms, never anticipated encountering Lance or the child she had given up at birth. She also never anticipated the impact the cod moratorium had had on the town she once loved. It was now impossible to simply move on.
With all her forces, money and passion, Kay sets out to put the town to rights, risking her cover and her life, to take down the man who had taken everything from her.
Hard Cover Edition with Dust Jacket
$21.95