Stories for Andrew by A.J. Gillard 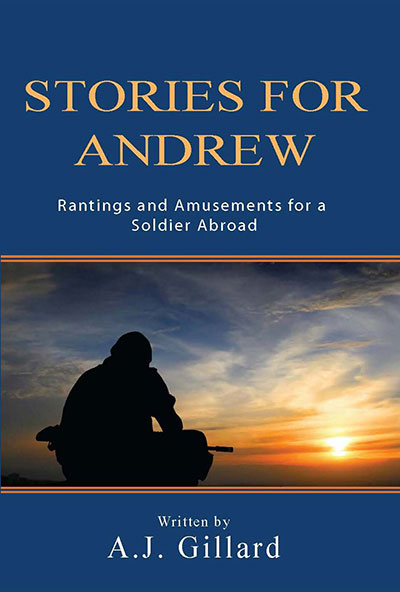 Stories for Andrew:
Rantings and Amusements for a Soldier Abroad
by A.J. Gillard
When A. J. Gillard starting writing short stories, poems, and anecdotes for her best friend, Andrew Simms, who she often refers to as “my soldier,” she had no idea that one day there’d be an entire collection.
Aware of the stress placed on soldiers, whether at home or away, Ms. Gillard has always hoped that a bit of humour could alleviate some of the strain—a momentary release from the trials of military life. Each of the Stories for Andrew: Rantings and Amusements for a Solider Abroad was written to make one man smile. Now, Ms. Gillard hopes those smiles will reach many more souls.
A series of short stories and light poetry, Stories for Andrew: Rantings and Amusements for A Soldier Abroad is a compilation of wonderful writings that can be enjoyed singularly or all at once. They are light, funny, and sometimes touching, always with a hint of Newfoundland wit and humour.
Both Ms. Gillard and Andrew are proud Newfoundlanders. No matter where they go in the world, whether for business, pleasure, or being deployed to a combat zone for active duty, they carry the rhythm of the island with them. Newfoundland has always been associated with military, even acting as an active base for The U.S. Military from 1940–1990.
Newfoundlanders have grown up surrounded by military and today the military personnel from this province make up the largest per capita percentage of the Canadian Forces. Almost every family in Newfoundland has a soldier in their ranks, somewhere. This book is for them, for anyone who knows the pain of separation and needs a laugh. Mostly though, they are Stories for Andrew.
$21.50
Hard Cover Edition with Dust Jacket