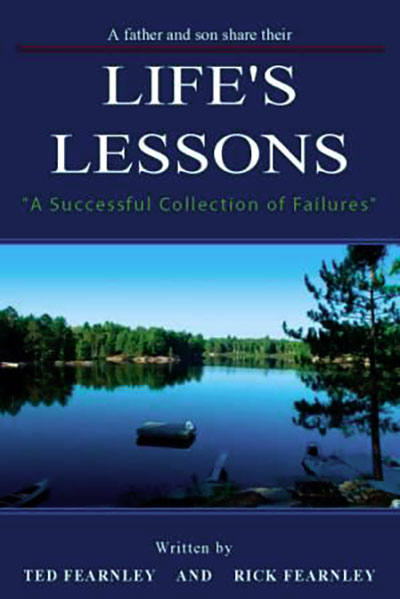 Life’s Lessons:
A Successful Collection of Failures
by Ted Fearnley and Rick Fearnley

When Ted Fearnley was told he had cancer he was anxious to distribute his family heirlooms to his children and grandchildren. However, his oldest son, Rick, wanted only one thing from his Dad: Ted’s stories. All his life, Rick had listened to his father’s comical stories of chance and misadventure. He wanted a record of the craziness to share with his children, and to carry on the family tradition of storytelling by taking it to the next level.
Together Ted and Rick began tapping out stories of Ted’s childhood, and continued with stories of Rick’s upbringing and the lives of the generation that followed. In the end, four generations of their humorous history had been preserved, as only they could tell them!
Both hilarious and touching, Life’s Lessons: A Successful Collection of Failures is a compilation of short stories, that highlight this comical father and son’s uncanny ability to find themselves in some sort of trouble—together and on their own.
Whether you are looking to learn from their mistakes by reading the whole text from cover to cover, or enjoy their stories just one at a time in any order, this book will make you laugh out loud. It will bring you right into the Fearnley family, where you can share their laughter, and learn their Life’s Lessons…so hard won over the years.